It was so close…the semi's were within reach; but up against an incredibly tough #2 seed opponent, the Indian duo of Chinappa & Pallikal, Canada's Cornett & Todd failed to reach the semi-finals of the 2017 WSF World Doubles Championship [click here for QF match score].  The Canadian duo played well, and have been playing well all championship – they have faced the top two seeds of the championship and taken both matches to the third and deciding game.  Cornett & Todd have found their 2015 Pan Am Games silver medal groove and will no doubt play hard until the end!

The duo now starts their fight for fifth – a fight they are one step closer to achieving as confirmation of the Malaysian duo withdrawing has come, resulting in a bye for the Canadians.  They now wait to see who they will face in the 5th place match up, scheduled for Saturday August 5th at 12pm local (7am EST).
In addition to the Women's pair, Canada remains in the hunt for strong finishes in the men's and mixed divisions as well. Action continues (bright and early for those watching at home from Canada) with all four squad members on court tomorrow.

For pictures of the Canadian squad in action, visit http://squash.ca/en/2017-wsf-world-doubles-championships

Canadians Ready for the 2017 WSF World Doubles Championships
July 1, 2017 – Starting tomorrow (Tuesday August 1st), the Canadian squad will hit the doubles courts of the National Squash Centre in Manchester, England for five days of International competition.  From August 1st to the 5th, doubles pairings from around the globe will battle it out at the 2017 WSF World Doubles Championships.  Ahead of the start of the championships the duos in all three events were seeded, providing the four Canadian athletes traveling to Manchester a look at the competition they will face across the pond. 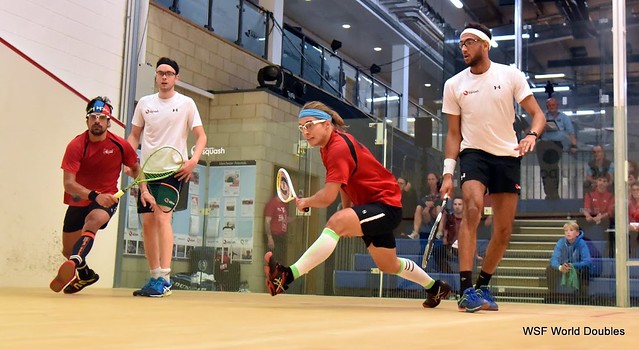