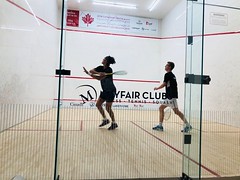 Hollie Naughton is First Canadian Woman To Be Ranked In The...